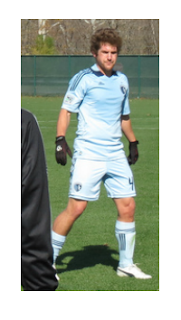 As I'm sure many of you have already heard from different sources including SportingTimes.net and downthebyline.com Sporting Kansas City are reportedly after a local kid called Michael Thomas who has had a few stints in Europe since leaving the US after he was drafted by San Jose in 2010.

This comes off the back of my story about a month and a half ago where I linked the midfielder with Sporting Kansas City after he played in a reserve league encounter with FC Dallas and photos were released onto the internet.

However at that point I did not know the trialists name and was merely guessing at his bio. Judging on the pictures I guessed that he was 5'10 and a midfielder, both remain true. When he played in the reserve league game he wore #44 and scored for the Rangers on the stroke of halftime.

Michael Thomas, 23, has played for the Kansas City Brass and Notre Dame from 2006-2009. He has connections with Matt Besler (Notre Dame) and Seth Sinovic (youth club).

I think Michael would be a decent signing for Sporting but since he is still contractually tied to Ljungskile SK we would have to pay a transfer fee for him which would mean we would lose some of the allocation money we have received from the various trades of Jack Jewsbury, Davy Arnaud, and Omar Bravo.

Is this really the best way to spend our money? I don't know but we will soon learn whether or not as the January transfer window inches closer and closer.
Posted by Alex Englén at 8:19 AM

Want to banter with me about FIFA?